Braunform, in cooperation with MOLDINO Tool Engineering Europe, has reviewed its electrode milling processes, developed alternatives and tapped into new potential. The solution had such a striking result that the entire graphite machining process at the plastics specialist in Baden switched to tools from MOLDINO. The milling operations in Bahlingen now achieve a higher surface quality and there is hardly any reworking. Tool life as well as process reliability increased and machining times have been reduced by a third.

In addition to turn-milling, wire and die-sinking EDM, Braunform considers milling in particular - graphite machining likewise high-precision HSC milling of hard materials - to be a key technology. “We have achieved a very high standard in milling over many years. Nevertheless, we always strive for continuous optimizations”, emphasizes Volker Kreutner (Head of the CAM, HSC milling and electrode production department) and refers to graphite machining, which is done on three 5-axis Exeron HSC-MP7s that are capable of 24/7 unmanned operation. "Hence, process reliability is a major aspect for us. Mainly our tools are used to produce smaller and very precise parts, which are often within the visible range." The requirements for accuracy, surface quality, near-contour cooling and demoldability are demanding. Thus, the tolerance requirements for the machining of electrodes in Bahlingen are within the range of 0.005 mm.

Braunform has been using MOLDINO products for hard machining for many years. The results with the tools from the Japanese manufacturer have been consistently positive, so using them for graphite milling seemed to be the obvious choice. Based on reference electrodes, the current situation was analyzed and alternative production strategies were identified. The test objects included an electrode for the cover of a razor with a tolerance requirement of +/- 0.005 mm. Following a few days of evaluating the existing processes to calculate the optimization potential, a time saving of approx. twenty percent was determined.

Looking at the electrode for the razor cover, the roughing process now starts with smaller tools. For this step a two-flute ball end mill with 2 mm from the D-EPDB series was implemented. Although roughing took a little longer, less residual material remained, which saved a lot of time during the residual material machining. Roughing is now performed with an increased stepover and stepdown (ae and ap) compared to the past. The residual material was removed from the corners with the smallest possible tool diameter (0.4 mm). This strategy also had the advantage of being able to get much closer to the final contour within the roughing allowances. For finishing, first a ball end mill with 0.4 mm diameter and 4 mm length was used, followed by another one with 0.3 mm diameter. In addition, larger feeds were applied, which were mainly achieved by higher stepover (ae). Since many segments were milled with the same tool, only four ball end mills from MOLDINO's D-EPDB series in total were needed for the contours of the complete electrode.

The result met all expectations. Thus, it was possible to significantly reduce machining time for this electrode by using new strategies and the D-EPDB ball end mill. The time savings were mainly achieved by having less residual material to be removed after roughing. There has also been a positive effect on accuracy and surface quality, due to the high level of geometric precision of the tools from MOLDINO. The characteristics of the ball have a crucial influence on the machining result. If the cutter tolerances exceed a certain threshold, this can be seen in the milling result of the electrode surface. The company from Baden made improvements in this area compared to the previous tools. The cutting edges of the MOLDINO ball end mills only showed small signs of wear after five hours. The previously used tool became almost unusable after only three hours.

As a result, the entire graphite machining process was transitioned to MOLDINO, which had a positive effect on the production costs. The profitability calculations based on the previous and new values for each electrode are convincing: "We achieve an annual saving of around 6,500 hours with all three machines due to the reduced production times, which equals a free capacity of around 11 months," concludes Volker Kreutner. "In addition, by switching to MOLDINO and thanks to the new strategies, we have better surfaces and almost no more rework."

Braunform - known for state-of-the-art plastic mold making. In 2007, the company was awarded Toolmaker of the Year (external toolmaking, over 100 employees) by RWTH Aachen (Aachen University of Technology) in the 'Excellence in Production' competition. Founded in 1977, the family-operated SME headquartered in Bahlingen am Kaiserstuhl, evolved from a pure mold making into a full-service company in the plastics processing industry. The portfolio includes multi-component, multi-cavity molds, rotary tables and other advanced technologies for the entire process chain. Braunform's customers operate in a wide range of industries including pharmaceuticals, personal care, consumer goods, automotive, electrical and water technology. www.braunform.com 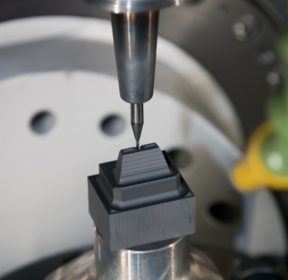 Milling cutter from the D-EPDB series