For many years, fischer Werkzeugbau has been milling electrodes in a production cell that also measures and erodes. In order to become even better at graphite milling, all processes were analyzed together with MOLDINO Tool Engineering and optimized to a large extent. Result: Three times higher feed rates, reduced manufacturing costs and better dimensional accuracy.

"In terms of autonomous electrode milling in the manufacturing cell, we had actually already reached a very high level," explains Thomas Brezing, team leader for milling machines at fischer Werkzeug- und Formenbau GmbH. "Nevertheless, there is still room for improvement – and that was our aim." Like much of the hard machining, electrode milling at fischer takes place in the 16-meter-long manufacturing cell. Here, two 5-axis machining centers for graphite milling and steel hard machining are linked with the two die-sinking EDM machines, the parts washing system, the coordinate measuring station and the storage areas via an articulated-arm robot guided on linear rails. At the Horb site, all the necessary electrodes, including those for the EDM systems outside, are produced in this cell. Although fischer was not dissatisfied with the actual situation at the time and did not have any direct problems, they did see potential for improvement: On the one hand, there was high wear and tear, which is why many tools had to be bought each year. In addition, there was a desire for shorter processing times. One particularly sensitive point was dimensional accuracy, as there were always tolerance violations within a series. These were revealed during the in-process coordinate measurement of the contour, but this entailed rework, including the expense of the correction programs.

For the graphite project, MOLDINO used the Production50® method (P50®), which was specially developed in-house for the milling sector. The aim is to analyze the existing milling processes together with the customers in order to gain a new perspective and insights on the entire manufacturing process. The holistic approach identifies areas for improvement. These can be sustainably improved as well as recorded in detailed profitability calculations and show the company the added value of the implementation. The first step in process optimization is the analysis of the actual state: For this purpose, not only the previous milling parameters such as machining strategies, tool selection or cutting values were examined for four different electrodes, but also what influences the NC programs have on the performance of the machine. Especially these parameters influence the dynamics and runtime of the processes. It was noticeable that the strategies and the allowance behavior during roughing were not in line. So, the finishing tool had to take away a lot of material, which led to problems with dimensional accuracy. In order to achieve this, the feed rate was reduced further and further in the small areas, resulting in longer processing times.

fischer and MOLDINO fine-tuned the CAM strategies and tested various torus and ball cutter combinations of the diamond-coated D-EPDR and D-EPDB series from the Japanese tool manufacturer. In the roughing process, the oversize has been greatly reduced compared to the past, and is now closer to the final dimensions. In this way, the feed rate could be tripled, and wear reduced. Part of the optimizations also include checking the tool database and setting up the tool grading. Since shorter effective lengths are now used for finishing, there is less deflection, greater accuracy and an improved final dimension. This guarantees long term dimensional stability. Besides the newly developed machining strategies, the quality of the used MOLDINO tools was also crucial for the success of the project. The diamond-coated torus and ball end mills of the D-EPD series are specially designed for graphite machining and cover a wide diameter range from 0.1 to 10 mm. One highlight of this project at fischer is that high feed rates can be achieved with small ball tools when machining graphite. In finishing, tool making has increased the feed rate by a factor of three and is still more dimensionally accurate. With the same tool life as before, fischer works off three times as much with the MOLDINO diamond tools.

The time saved is also remarkable: Previously, 265 minutes were needed to mill the project electrode, now it takes only 185 minutes. This has a positive effect on production costs because more is machined at the same time and fewer tools are used: Previously, seven tools were required for the project electrode, whereas only four tools are needed. This way, the procurement costs have decreased. Fewer tools also mean less set-up effort. "The manpower for setting up, i.e. presetting and changing the tools, has also been reduced. This also has a positive effect when preparing for unmanned weekend operation and thus significantly increases the profitability of the fischer company," Thomas Brezing sums up positively. "With the same tool life as before, we work off three times as much with the MOLDINO diamond tools. So, we really brought the small tools up to speed."

Founded in 1954, fischer Werkzeugbau has been operating as an independent GmbH since 2015, but considers itself as part of the fischer group of companies, which also includes the world-famous fastening systems. The headquarters of the division, which has a total of 120 employees, is located in Horb am Neckar with 58 employees, in addition there are also three other locations, among them Vyškov in the Czech Republic. The division serves the own group and external customers with new productions of pilot and series tools, including repairs. In Horb, injection molding tools are mainly produced for fastening technology and the automotive sector, as well as silicone cartridge tools for chemical fastening technology. Mainly processes such as single and multi-component technology up to 3K, Indumold (inductive mold heating) or internal gas pressure are used. But also, mold labelling, thermoset processing or one or the other surface process. In addition, punching and bending tools for heavy-duty fastening technology are manufactured in Horb. www.fischerwerkzeugbau.de/en/ 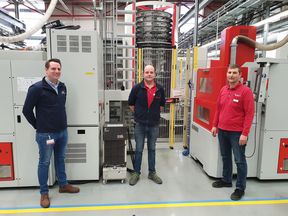