Festo Polymer's toolmaking shop in St. Ingbert is one of the most modern in Germany and was named Toolmaker of the Year in 2017. For EDM, electrode milling and hard machining, the Saarland-based company consistently relies on automation. To further improve 24/7 operation, the milling processes were jointly analysed and optimised with the MMC Hitachi Tool. The result is fewer tool types and greater process reliability.

“For us, moving to the new location in 2015 was an opportunity to rethink existing processes and - where it makes sense - to invest in new technologies,” stresses Jörg Weber, Production Manager at Festo Polymer. “In the process, we have consistently automated toolmaking and focused on our core competencies.” For this reason, only shaping parts, graphite or high-precision steel parts are machined during hard milling. Festo has achieved a very high standard in milling over the years. However, the aim is not to rest on one's laurels on what has been achieved, but to continue to continuously improve, especially with regard to dimensional accuracy, tool life and process reliability. This is a quasi evolutionary process that has various adjusting screws. The milling processes for automation are to be standardised, for example. In St. Ingbert, there was also the wish to put the most frequently occurring machining tasks to the test in order to optimise and reproduce them in terms of tool selection, milling strategies and cutting data.

In May 2014, it was thus decided to intensify the partnership with MMC Hitachi Tool. The first step was to optimise hard machining. Together with the process optimiser Stanislav Pupak-Martin from the Japanese tool manufacturer, various tests with different workpieces and various MMC Hitachi tool tools were carried out over a longer period of time, from roughing and plunge milling to finishing - and thread milling. Materials such as the X38CrMoV5-1 (1.2343) frequently used by Festo, X42Cr13 (1.2083), X45NiCrMo4 (1.2767) or Böhler steels such as the M390 were machined, mostly in hardnesses of up to 54 HRC, but also - as with thread milling in the Böhler K390 - sometimes up to 64 HRC.

For the various machining tasks, different milling strategies, cutting values and different MMC Hitachi Tool milling cutter types were compared with one other. For example, when roughing a mould insert of 1.2343 with Z-constant: The process optimiser replaced the 20-millimetre torus milling cutter with indexable inserts initially used with the ASRM Pico Maxi screw-in torus milling cutter (indexable inserts JS 4060). With 150 minutes, the ASRM showed considerably more performance, although the depth adjustment had to be reduced by half to 0.3 millimetres due to the machine situation. As part of the optimisation work, the EDT thread milling cutters at Festo were also implemented in the manufacturing process. These tools mill threads, which are otherwise often vertically eroded, directly - without pre-drilling - even into super-hard steels.

Encouraged by the significant improvements in hard machining, another project was to show that the positive experiences made with MMC Hitachi Tool could be transferred to graphite milling. The procedure here was similar to that for steel - at first the process was closely examined. For example, how are the electrodes programmed? Some of this was done over a period of one to two days, often together with several employees. In between there were smaller workshops where the new parameters were explained and discussed. This way, new milling strategies and cutting values such as feed rate, speed or infeed were jointly defined, which were, so to speak, tailor-made for automatic graphite milling in Festo toolmaking. In doing so, process reliability always had top priority. The new values were then entered into the VISI CAM tool database.

A special test milling operation, like Festo had previously used to machine the electrodes, was to produce results. This involved the complete machining of seven electrodes for the form insert of a pneumatic piston with a 1 mm ball milling cutter. The process optimiser followed the 'Production 50' optimisation concept developed by MMC Hitachi Tool especially for the milling sector. The MMC Hitachi Tool was the diamond-coated solid carbide ball cutter D-EPDB-2010-5 with two cutting edges. Whereas the two comparison tools one each were only used for roughing residual material and the second for finishing, the D-EPDB was used for roughing and finishing.

The machining parameters were largely the same for all tools except for the feed rate and slightly different infeed values. With the D-EPDB, more than two and a half times the feed rate of the two competitor candidates of 3.2 metres per minute was achieved. When roughing the residual material, this did not bring any advantages in terms of time due to the slightly different side and depth infeeds. But Festo became around 30 percent faster at sizing. “Together with MMC Hitachi Tool, we were able to greatly improve the milling processes and reduce the tool types used, which is very relevant for automation and the standardisation of the processes that is absolutely necessary for this,” said Jörg Weber, satisfied with the results. “With regard to automation, it is also important that we have made good progress once again in terms of process reliability.” 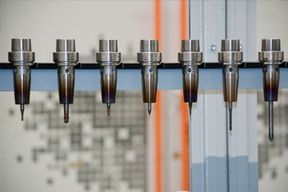 Milling cutters from MMC Hitachi Tool are waiting to be used in the production cell.