'The Gallea series is a highly efficient finishing concept especially for die and die making and consists of inserts and solid endmills that take advantage of the principle of barrel milling with special geometries on the radial and or axial cutting edge', explains Giuseppe Macchiano, Sales Manager for Europe at MMC Hitachi Tool. The tool geometry of circular segment milling tools enables significantly higher infeeds step-overs between paths and line jumps with the same or better roughness depth and peak height if one compares the new concept with conventional tool systems of the same diameter.

After MMC Hitachi Tool launched the world's first indexable milling tool with radial barrelshape geometry in 2016 the portfolio is now being expanded by three further products: the GP1LB and GP1T two new mono-plate tools are now available characterized by a combined lens barrelshape geometry and a high holder plate accuracy. The concept of the unit holder which also includes the well-known high-accuracy ball and torus tools of the ABPF and ARPF series can be implemented easily and user-friendly in the production process. The product portfolio also complements the GS4TN a solid carbide barrel cutter of tangential shape which fully demonstrates its strengths especially in 5-axis machining of materials up to 60 HRC as Hitachi emphasizes.

The process optimisation concept Production50 describes the basic testing of the production processes. The aim is to constantly adapt the production processes in the machining industry to the increasing demands of the market by means of a high quality of the products and services, as Hitachi explains. According to the tool specialists from Nippon the total production costs could be divided into the three blocks 'tool costs', 'fixed costs' and 'production costs'. At around 70%, it is said that variable production costs (such as machine costs, wages and energy) were the largest block, while tool costs accounted for only about 5%. As a result, Hitachi says that mold and die makers can not compensate for rising cost pressures by reducing tooling costs.

Much depends on the cutting efficiency

However, tooling costs offer the opportunity for a large leverage effect in terms of variable production costs: for example an increase in production speed can reduce the number of required machine hours, personnel costs and energy costs. Optimized production is the result of perfectly coordinated manufacturing parameters. 'These include the machine park, the tools and CAD / CAM programming, which can save time and money and set new quality standards', says Macchiano. 'Consequently it is more important to design the production processes in such a way that die and molds are produced faster and therefore more efficiently in order to remain permanently competitive. This is the central starting point of Production50.'

The nine-step plan for optimized processes

Nine steps includes the underlying schedule of Production50® which looks like this: 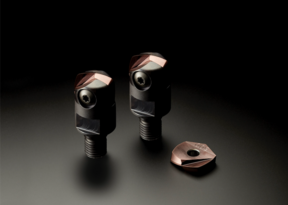 The Gallea series from MMC Hitachi Tool is described as a highly efficient finishing concept developed especially for mold and die. The series consisted of indexable inserts and solid tools which took advantage of the principle of barrelshape milling with special geometries on the radial and / or axial cutting edge. And with the Production50 production concept also presented the exhibitor wants to offer a nine-point program that makes cutting even more economical. (Image: MMC Hitachi Tool)